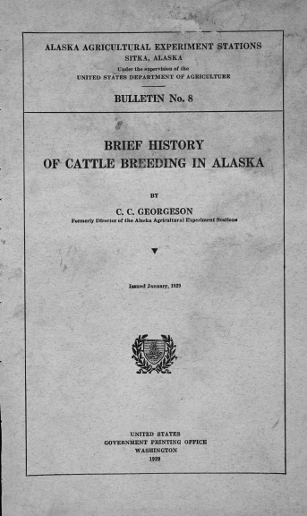 So far as is known the Russians were the first people of the Caucasian race to settle in Alaska. They early recognized the possibilities of Alaska for stock-breeding purposes and imported cattle from Siberia in the belief that the animals could be made to sustain themselves on the lush pastures abounding here and there in the new country. Cattle raising was in progress at each of the principal Russian settlements, including Kodiak, Kenai, Ninilchik, and Sitka, when the United States purchased the Territory from Russia in 1867. Some cattle were introduced from the States after the American occupation, but representatives of the original Russian stock were still in evidence when the first agricultural experiment station was established at Sitka in 1898. All the cattle at Kenai and at Ninilchik, on Cook Inlet, were descendants of those that had been introduced from Russia, and their progeny are still to be found at Ninilchick. The animals were small, slim in all proportions, and had a narrow head with thin, upright horns. The average weight of the mature cow was about 500 pounds. In color the stock was brown, or dark red, and occasionally the body Avas mottled. The milk yield was low and had a fat content of about 3 per cent. The cattle had deteriorated not only in general conformation, but also in milking qualities and in suitability for beef production. In 1906 when the Galloway breed was established by the stations as a foundation stock at Kalsin Bay, 15 miles from Kodiak, it was learned that cattle in considerable numbers had at some time in the past been maintained there by the Russians. The most convincing evidence supporting this fact was the discovery in the region of a large pile of thoroughly decayed cattle manure. The Russians, realizing that about 5,000 or 6,000 acres of land at the head of Kalsin Bay were adapted to cattle raising, had probably used the place as a breeding center whence they distributed stock to the settlements throughout the coast region. A few head of cattle of the dairy type were introduced with the establishment of salmon canneries at various points along the coasts. Some of the descendants of these animals remained in the country. At Kodiak, Sitka, Kenai, and other places where Americans had settled, a few head of cattle were kept for the supply of milk. More cattle were introduced into the country with the development of new settlements and camps. Dairies sprang up in the towns to meet the local demands for milk. These cattle, however, were maintained, excepting for the small amount of pasturage available during the summer, on feed which had to be imported from Seattle for the purpose. This is the situation even to-day, but it does not show that cattle can not be supported by locally produced feed. The winter maintenance of cattle is a matter that must be given careful consideration in all parts of the Territory. Experiments with the silo at the Kodiak station were so successful that winter feeding was not found to be the perplexing problem it would have been had the cattle been dependent upon hay and grain shipped in from Seattle. Any kind of green forage can be made into silage. Grown with peas or vetches, oats make excellent silage. The native grasses, especially wild beach rye (Elymus mollis) and a tall sedge {Carex cryptocarpa), have been relied upon for silage at Kodiak, sometimes supplying 90 to 95 per cent of the material put up annually. Sunflowers and horse beans have been successfully made into silage at Matanuska. Artichokes for silage have been grown at each of the stations. The tops are especially well suited to silage making in that the yield is heavy. In seasons unfavorable for haymaking, native bluetop (Calamagrostis langsdorjii) is utilized to some extent for silage. At times the silo at Kodiak has been kept filled with about one-third each of sedge, beach grass, and field crops consisting of oats, peas, barley, and vetch. At Matanuska, in 1925, 2-year-old heifers daily gained in weight and kept in thrifty condition when they were fed 16 pounds of silage, 8 pounds of straw, and 5 pounds of roots. Cows were maintained in a fair flow of milk when they were fed daily per 1,000 pounds of body weight, 25 pounds of silage, 10 pounds of straw, 12 pounds of roots, and 4 pounds of barley-oat chop. To-day the Alaska stations are maintaining a few head each of the Galloway and the Holstein-Friesian breeds. The Galloways are kept at Kodiak and the Holstein-Friesians and crossbred Galloway-Holsteins at Matanuksa. Some yak are being maintained at Fairbanks for crossing with Galloways.