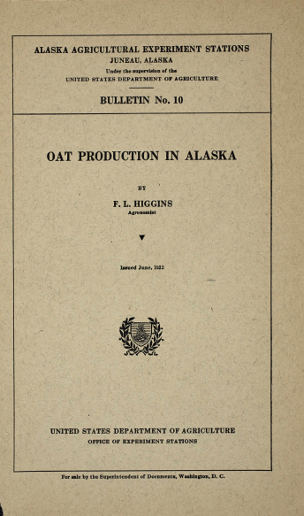 The oat crop occupies an important place on the farms in interior Alaska, especially in the Matanuska Valley and the Fairbanks region of the Tanana Valley. The crop is used chiefly for hay. It is one of the more important grain crops in the system of diversified farming recommended for Alaska by the Alaska Agricultural Experiment Stations. Good yields for hay and silage can be produced in southeastern Alaska, but production is limited (1) by the small areas of suitable land available for farming, (2) by the high cost of clearing the land, and (3) by cool, wet weather in the fall which makes difficult the work of harvesting. Southeastern Alaska is rough, rugged, and heavily timbered and has comparatively little land available for cultivation. Oats can not be depended upon to mature at Kenai, on Cook Inlet, because of the unfavorable weather prevailing there. However, oats can be grown in that region for hay and silage. The cool, rainy weather in the fall is more favorable for silage making than for haymaking. A small area of oats is grown for forage in the Homer region on Cook Inlet. This region is well suited to oats and vetch, and also to oats and peas for hay and silage. Weather conditions there, as in the Kenai region, are adverse to the ripening of oats. Oat growing in the Tanana Valley, near Fairbanks, began about 1907 with the production of hay for horses, shortly after the establishment of a mining camp in the valley. A number of horses were used in the region for freighting, and as timothy hay had to be shipped in from the States at a cost of more than $100 per ton, some of the teamsters decided to clear their lands and grow oat hay for the local market. Oat hay of good quality brought from $60 to $90 per ton, depending upon market requirements. Oats for forage is an important crop in this region. The native bluetop grass (Calamagrostiis spp.) is found growing only in certain localities, and then in irregular patches. Experience has shown that it does not withstand cutting in successive years. Hardy, high-yielding biennial or perennial legumes have not yet been found which will produce as high tonnage per acre as do oats, in interior Alaska. Oats seeded with peas or with vetch for hay have been found to make an efficient silage material. The addition of legumes to the ration improves the feeding value of the hay and is especially desirable for dairy cows and young stock. Because of inadequate threshing facilities, oats were not grown for grain for some time. However, with the introduction and development of early-maturing varieties of oats and the purchase of a threshing machine by the station for station and community use, farmers began seeding oats for grain. Alaska farmers follow different methods in growing oats. Some plow in the fall, others in the spring, and still others not at all. Those who do not plow prepare the seed bed by disking and harrowing in the spring. Again, some farmers follow a definite scheme of rotation to conserve and increase soil fertility and to lessen loss from crop diseases, whereas others broadcast their grain seed without being reasonably sure that it is free from disease. As a result of general poor management much of the land under cultivation is low in fertility and badly infested with weeds, making it necessary to give attention to weed control. This bulletin, based on observations and experiments in different parts of Alaska, has been prepared for the purpose of assisting farmers of the Territory to grow oats successfully.